From February of 2017 to May of 2018 I worked as a freelance videographer/editor at IGNITE Media Group. One of the projects we worked on was for the Fowling Warehouse located in Hamtramck.

We finished some videos for the United Shore Professional Baseball League at Jimmy John’s Field in Utica, MI.

In late October 2013, I accepted a job with Grand Valley State University and relocated to Grand Rapids, MI. In my new position at the Grand Valley State University Simulation Center, I assisted with the management of all the audiovisual operations for the GVSU Simulation Center at the Cook-Devos Center for Health Sciences. I collaborated with the creation, production, and delivery of online lectures and other multi-media content for health professions students and faculty so they can stream events and watch recorded media online.  I managed video operations in the Arcadia simulation database and provide technical support for the simulation labs when needed. I also created videos such as the one below to help promote the GVSU Simulation Center and other Office of the Vice Provost of Health programs. The video below was showed at the MIPERC conference on September 19, 2014 discussing the advantages of Interprofessional  educational programs in the health care field. For more information on MIPERC please click here their website.

On Season 13 of American Idol I worked three days as a Production Assistant on American Idol for the Detroit Audition Judges Round at the Westin Book Cadillac Hotel. On the first day, I helped load in the set and set up the production base camp. The remaining two days, it was my responsibility to ensure the Detroit finalists filled out the necessary paperwork, evaluations, and on camera interviews that were necessary for them to move on in the American Idol competition.

On Season 14 of American Idol I worked as a Production Assistant for the Top 24 and Top 16 Semi Final shows. I helped with transportation of crew and contestants between the Westin Book Cadillac Hotel and the Fillmore Detroit. I assisted in various production tasks, and I suggested and helped filmed Detroit landmarks to be used as B-Roll for the show.

One of the segments I helped produce is in the space below. 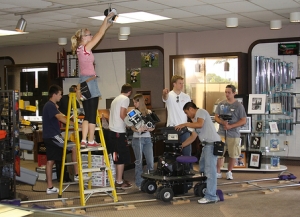 The Summer Film Project was founded in 1995 by Grand Valley State University. It brings students, faculty and industry professionals together on the production of a film.  The preproduction and filming takes place in the summer session.  The fall semester is devoted to postproduction where students complete the film and prepare for its premiere at a local movie theatre and enter it into film festivals across the country. I worked on two of Grand Valley’s summer films The Darkroom and  Horizontal Accidents. You are now able view these two films below. If you’d like more information on Grand Valley’s Summer Film Project click here. To view the other Summer Film Projects online click on the Vimeo page here.

The Darkroom from GVSU Film/Video on Vimeo.

I was a participant in the 2012 48 Hour Film Project: Detroit and this year I worked with BROBIEfilms. Our film “Detective Diaries” collected a total of three awards. We won 3rd Place Overall, along with Best Sound Design, and  Best Costumes.  My primary job on this project was the Assistant Editor. I transcoded footage, synched audio, organized footage, and put together a rough cut of the film to allow the director more time to film and to have an easier time editing. I also acted as boom operator/sound mixer for a small portion of the film shoot. I’m very proud of the work that I and the rest of BROBIEfilms team were able to accomplish in such a small period of time.

In December I started a part time internship with Kinetic Post. It’s a full service postproduction house in Southfield, MI.

Through this internship I learned Avid’s editing systems, improved my motion graphics skills,  gained more experience in a post-production house environment, and learned as much as I can from this awesome staff and facility. I was fortunate enough to work with this facility from December 13th, 2011 till March 31st, 2012. For more information on this excellent post-production house please visit their website.

I was approached by a local non-profit group Clarkston SCAMP to make a video describing the program. For over thirty five years  Clarkston SCAMP has provided a five week summer camp for children and young adults with special needs. Throughout the year there have numerous fund raisers to help keep SCAMP affordable for the parents of these young people. Having worked as a student aide and volunteered for SCAMP in years past it was my pleasure to use my talents to help this great organization. It is my hope that this video will bring awareness to organizations like Clarkston SCAMP.

My duties on this projected included but were not limited to:

*Editor- Both of my footage and other archive picture and video clips.

For more information on Clarkston SCAMP please visit their website.

On September 28th, I worked with Green Sky Creative  filming a  promotional interview with Tom Izzo and his family regarding the  reading program EBLI.  On this interview shoot, I worked as an  additional grip and did electrical set up with the lights. I lent my T-3I camera  for the interview so that we could have three cameras going  simultaneously. While the cameras were rolling, I was the boom operator  and sound mixer to insure we had great audio on set.

Here’s the finished video below.

“Antiques: Designing with the Past in the Present”

* Jan Lawrance of Designs by Jan